Given this extensive dependence on consumption taxation to finance government expenditures, policymakers should carefully consider who bears the burden of the tax.

On the surface, a consumption tax seems simple: a tax that is proportional to the things that we consume. In reality, consumption tax bases are highly partitioned into groups of expenditure items that receive special treatment, either through differential tax rates or through tax exemptions. Housing, for example, is not taxed at the sales tax rate, but rather at the property tax rate. Most health care expenditures, by contrast, are exempt from taxation altogether.

Many argue that sales and excise taxes are regressive based on the strict relationship between annual income and taxes paid. As a household’s income rises, the portion of income allocated to consumption declines, and the portion allocated to savings rises—concepts for which John Maynard Keynes coined the terms “marginal propensity to consume” and “marginal propensity to save.” This decline in consumption as a percentage of income is often used to substantiate claims of consumption tax regressivity. Such a claim obfuscates the fact that savings is just another term for future consumption, which eventually faces similar tax exposure.

A particularly interesting feature of sales and excise taxes is that individuals can avoid them by not consuming the taxed items. For example, one could take public transportation to avoid paying sales tax on a vehicle and excise tax on fuel. Because of this differential tax treatment across consumption goods, each household expenditure can be categorized according to whether or not it is included in the sales or excise tax bases. Following Poterba’s method, measuring the relationship between sales- and excise-taxable expenditures and income provides a better indication of how the respective tax burden corresponds to lifetime income.

To test whether high-income earners substitute away from taxable goods, a typical tax base can be reconstructed using the Consumer Expenditure Survey (CEX). This data set contains detailed information regarding household expenditures and income levels. The first step in analyzing the data involves identifying which consumption items are typically included in sales or excise tax bases. The next step involves determining how taxable consumption in each tax base changes with household income. A negative relationship would indicate that the tax burden falls more heavily on low-income households, while a positive relationship would imply the opposite.

This study analyzes data from the 2015 CEX, which documents an estimated 60-70% of all household expenditures at varying granularity of consumption categories.3 Although the expenditure items in the survey do not comprise an exhaustive budget, the CEX still provides the best data available for studying taxable expenditure patterns as they relate to income. 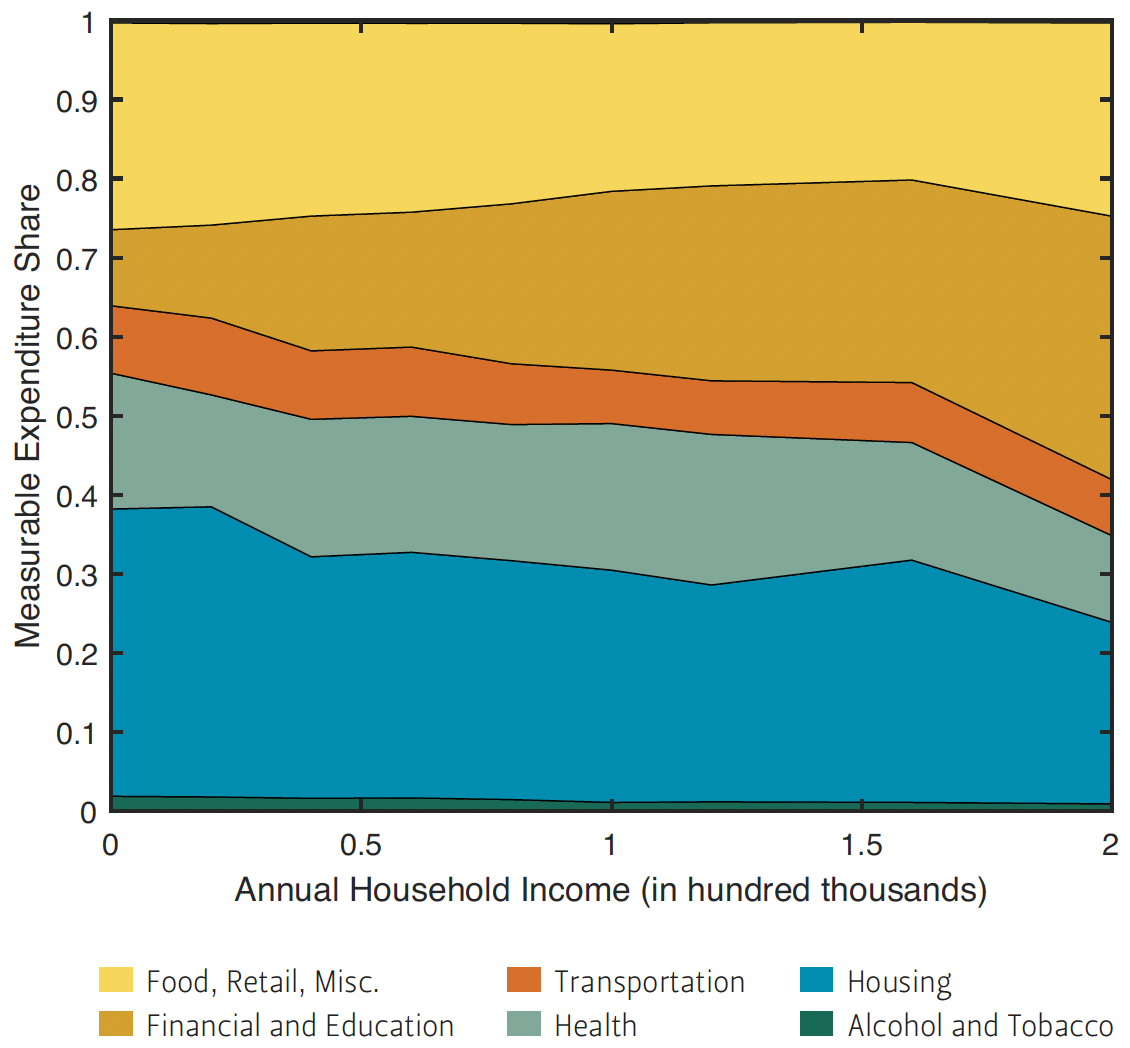 While each state levies its sales tax on a unique set of consumption goods, several states have many of the same items in their tax bases. Of the large expenditure categories, education, financial services, and health are generally excluded from sales taxation. Within the housing expenditures category, property payments, such as rent or mortgage, are generally excluded from the sales tax base, but home furnishings and appliances are usually not excluded. This leaves transportation, food, retail, and miscellaneous expenditures to comprise the remaining sales tax base. Groceries are usually exempt from sales taxation, while restaurant dining is often not exempt. Public transportation is generally excluded from sales taxation, but vehicle payments are included in the sales tax base. Retail and miscellaneous items, such as personal care products, are generally taxed as sales, but most services are not taxed. For the purpose of constructing a realistic sales tax base, entertainment services, such as sporting event tickets, are included in the sales tax base, but other services are excluded.

Consumption items are categorized as excise-taxable based on whether they are generally treated by the tax system uniquely. Motor vehicle fuel, alcohol, tobacco, lodging (e.g., hotel stays), and home utilities, such as electricity and water, each satisfy the definition of an excise tax and collectively comprise the excise tax base. 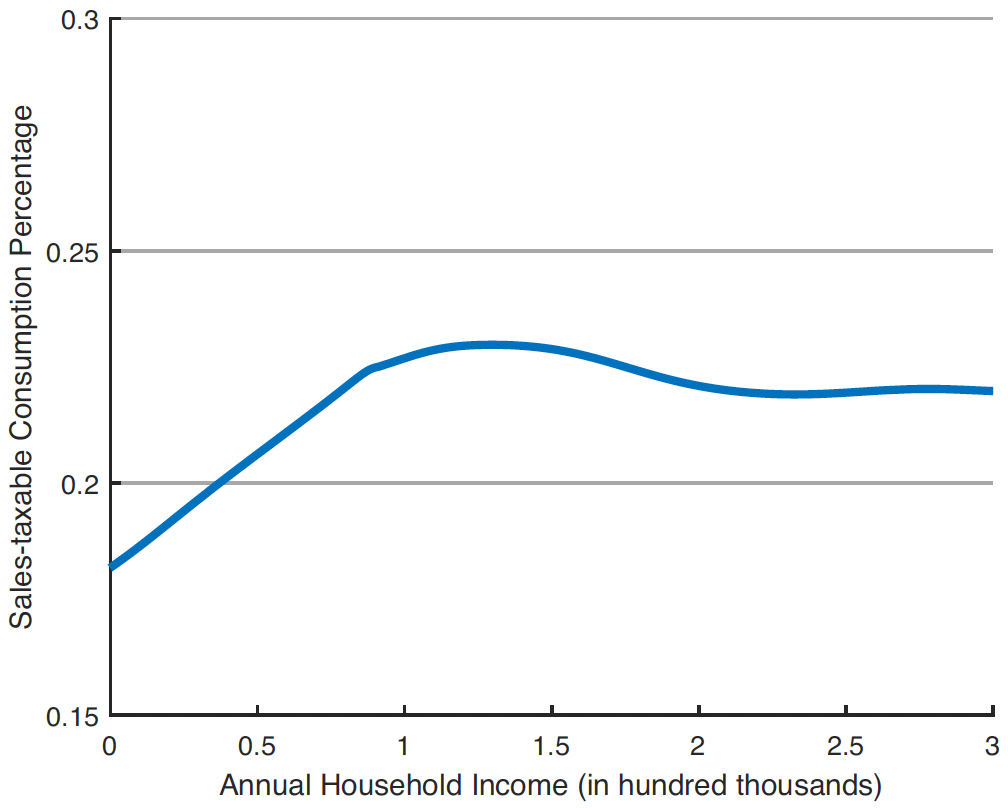 After carefully evaluating the CEX data set and constructing a typical tax base, the next step is to estimate the percentage of taxable expenditures across income levels.4 Figure 2 shows that the share of expenditures included in the sales tax base increases steadily by roughly five percentage points—from 18% to 23%—for households earning up to $100,000 per year. However, the base declines around one percentage point beyond $130,000 and stabilizes at around 22% of consumption for households earning above $200,000. 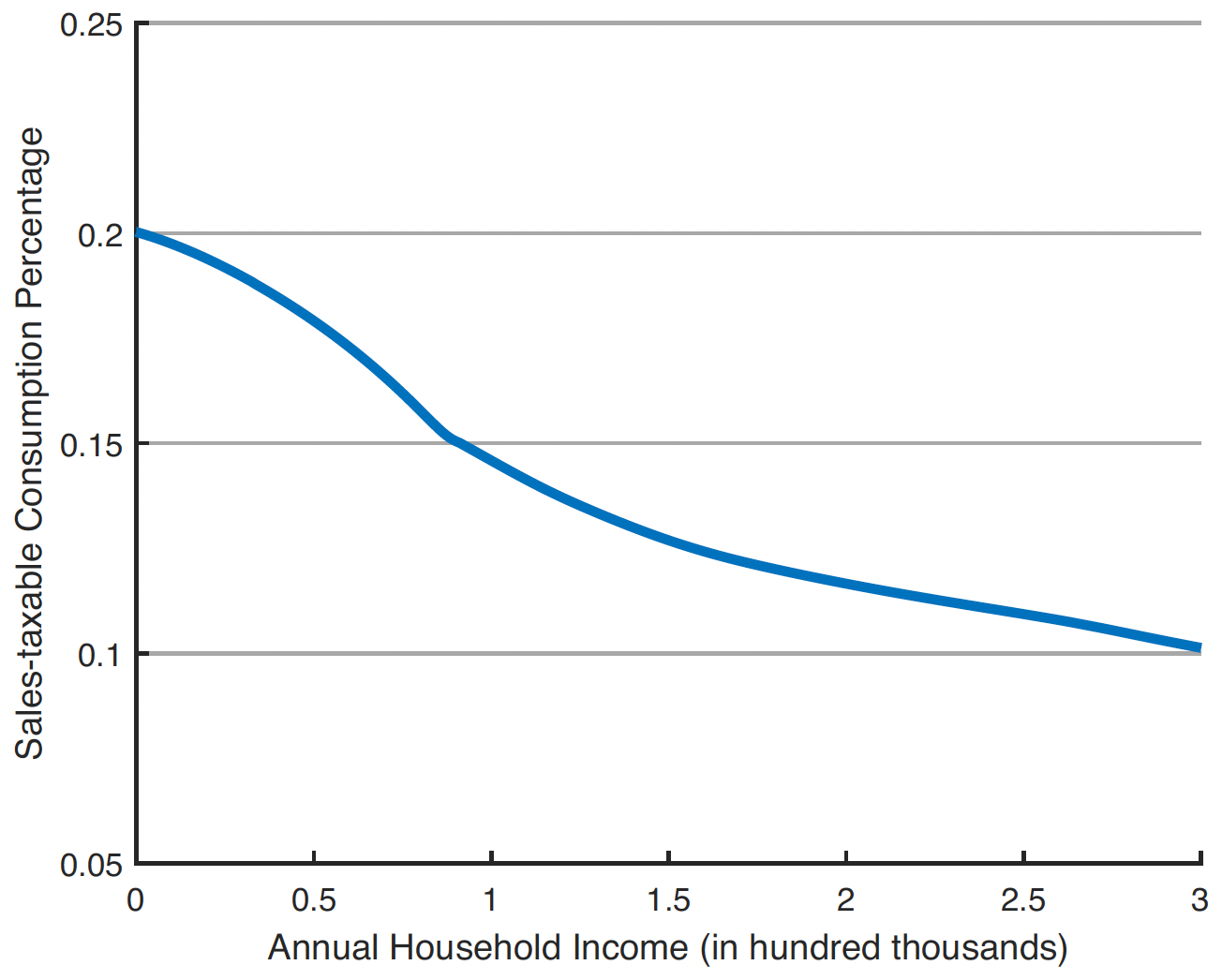 This graph suggests that sales taxation may actually be progressive for most households. Data from the 2015 Current Population Survey shows that 73.6% of U.S. households had an annual income less than $100,000, and 87.7% of households had an income below $150,000. Further breakdown of this relationship across different age groups results in a similar pattern, suggesting that lifetime consumption patterns do not show evidence of differential age-dependent tax incidence after accounting for income. This suggests that a shift in taxation toward sales taxation may actually increase a state or municipal tax structure’s progressivity.

Figure 3 shows that the excise tax burden falls more heavily on lower-income households. As household income increases up to $100,000, the fraction of excise-taxable expenditures falls about six percentage points and declines another four percentage points as household income rises to $300,000. As opposed to sales taxation, a shift toward excise taxation reduces the progressivity of a state or municipal tax structure.

Although sales taxation often faces opposition based on the assumption of a strict relationship between income and taxes paid, this analysis shows that sales-taxable consumption actually rises with income. This implies that the burden of an increase in the sales tax rate may actually fall more heavily on households with higher lifetime incomes. By contrast, excise-taxable consumption falls as income rises, suggesting that increases in excise taxes unambiguously affect lower-income households more than higher-income households.

While this study can serve as a quick reference for policymakers considering the effects of changing the sales or excise tax rate, a tax jurisdiction’s actual tax progressivity depends on the unique composition of its tax base. Choosing to restructure the sales or excise tax base through exemptions and inclusions almost certainly changes the tax structure’s progressivity. To that extent, policymakers wishing to study the progressivity of taxing particular consumption bundles can reconstruct elements of their specific tax base using the CEX to measure the relationship between taxable consumption share and income.

4. In Figures 2 and 3, a non-parametric locally weighted regression is used to estimate the percentage of taxable consumption as it relates to income.

Recent U.S. Consumer Trends: Something Old, Something New, Something Borrowed — Should We Be Blue?