The Aftermath of the Arab Spring Protests: What a Public Opinion Survey Tells Us

Fellow for the Middle East

Mohammed Bouazizi’s self-immolation in Sidi Bouzid, Tunisia, in December 2010 triggered events that significantly altered politics in the Middle East and North Africa (MENA). In some countries, widespread protests led to the ousting of long-time dictators like Zine El Abidine Ben Ali in Tunisia and Hosni Mubarak in Egypt, whereas in others, like Syria, Yemen, and Libya, protests escalated into widespread violence between opposition groups and governments, and devastating conflicts persist.

The effects of the Arab Spring are still unfolding, but the high expectations for democratization and social justice appear largely unmet and significant questions remain regarding public opinion about these events. Seven years since the protests began, how do ordinary people in the Middle East view the Arab Spring process and its outcomes? What were the goals of the protests and were they met? Who benefited from this process and who was negatively impacted?

In a recent survey in 10 Arab nations (Algeria, Morocco, Libya, Tunisia, Egypt, Sudan, Iraq, Syria, Lebanon, and Palestinian Territories),1 we measured public attitudes toward the Arab Spring protests, its goals, and its beneficiaries. Unsurprisingly, we found that many respondents feel that the protests did not bring about the changes they originally hoped for. However, there is marked variation across these nations in how respondents view the Arab Spring. While a small number of countries have seen improvement in democratic conditions, most see social justice and economic improvement as distant promises that remain unachieved.

Goals of the Arab Spring Protests

In our survey, respondents were asked to rank the goals of the Arab Spring protests from a list that includes increasing political freedoms, reducing corruption, enhancing dignity, improving the economic situation, and promoting social justice, among others. The results reveal that economic concerns dominate survey respondents’ perceived goals of the Arab Spring (Figure 1). Improving economic conditions was chosen as the principal goal of the protests in half of the countries in the survey. Respondents in many of these nations also ranked tackling corruption and social justice as important goals, seemingly indicating a perceived relationship between economic woes and corruption, especially in Algeria, Morocco, and Sudan (Figure 2). Social justice topped the list of goals in Egypt, Algeria, and Tunisia, while Morocco was the only country to rank dignity as the most important objective.

Figure 1 — Goals of the Arab Spring

While economic goals were very important to respondents, political goals ranked relatively low in how respondents perceived the goals of the protests. Political freedoms were deemed the highest priority only in Lebanon and were the least-cited goal in over half of the countries surveyed, thus contradicting the widely held belief that democratization constituted the most important aim of Arab Spring protests. Indeed, other research such as the Arab Transformations Project has also found economic issues to be at the core of the demands in Arab Spring protests.2 In view of the prominence of demands for democratic rights during the protests, this finding is somewhat surprising. It is possible that political transformation was a primary goal during the protests, but citizens adjusted their expectations over time to fit shifting prospects of success, or they engaged in selective remembrance.

Figure 2 — Goals of the Arab Spring By Country

Were the Goals of the Arab Spring Attained?

Fewer than half of all those surveyed agreed that their country is better off after the Arab Spring protests, and an even smaller proportion believe the protests were successful (Figure 3). Respondents in Syria and Libya expressed the fewest positive sentiments about the protests’ impact and success. The majority of respondents in all nations in the survey found that the primary economic and political goals of the protests were not attained (Figure 4). However, in Tunisia, Libya, Lebanon, and Iraq, the attainment of political freedoms stands out as a lone bright spot among economic and political disappointments. The share of respondents agreeing that political freedoms were achieved exceeds 80 percent in Tunisia, 65 percent in Libya, and 45 percent in Lebanon and Iraq.

Figure 3 — Is the Region Better Off After the Arab Spring? 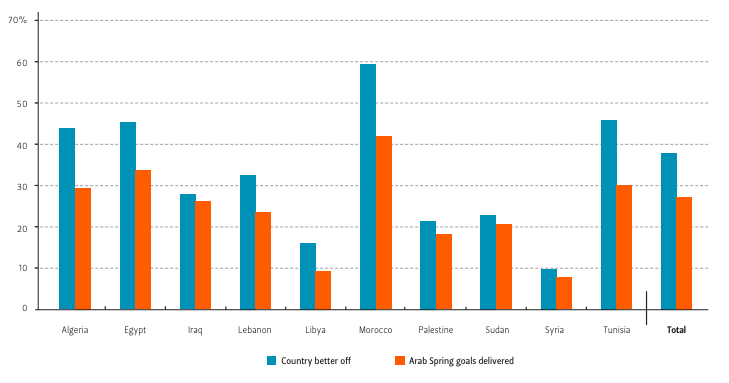 On average, fewer than 20 percent of respondents agreed that the goals of economic improvement and social justice were reached, despite ranking these as the top two goals of the Arab Spring protests. Reducing corruption was another important goal of the protests, yet overwhelming majorities of the respondents thought that this goal was not achieved (less than 25 percent on average), with Libya having the lowest rate of respondents agreeing, at less than 10 percent. Notably, 43 percent of Palestinian respondents thought the protests brought dignity, whereas respondents in the rest of the survey did not think so. Overall, respondents in most countries in our survey thought that the Arab Spring protests fell far short of fulfilling their intended goals. Increased political freedoms were acknowledged as the most widely achieved objective, but they were not the primary goal in many countries.

Figure 4 — Were the Goals of the Arab Spring Achieved?

Respondents indicated that the Arab Spring protests resulted in worsened ethnic tensions throughout the region (Figure 5). Respondents in eight of the 10 nations surveyed believed that ethnic relations deteriorated after the Arab Spring, and respondents in all 10 nations specifically cited heightened Sunni-Shia tensions. This negative outlook on ethnic and Sunni-Shia relations is most pronounced in Syria—most certainly aggravated by the ongoing civil war—followed by Lebanon.

Respondents were also asked to rate the improvement of certain freedoms after the Arab Spring, including women’s rights, freedom of the press, political expression, and freedom to choose leaders (Figure 6). Respondents in Tunisia expressed the highest levels of improvement in all four freedoms, especially in political expression—a result that corresponds with the success of the Jasmine Revolution in 2011. Moroccan respondents also noted improvement in all four categories, while respondents in Algeria, Iraq, Lebanon, and Libya each observed increased freedom in at least one of the categories.

Respondents in four nations—Egypt, Palestine, Sudan, and Syria—expressed stagnation or regression in at least three freedoms. The deterioration of ethnic and Sunni-Shia relations coupled with the perception of lagging freedoms compounds the new reality of increased political turmoil and instability in the region, feeding larger anxieties about the impact of Arab Spring protests on the day-to-day lives of individuals.

Respondents overwhelmingly identified the ruling elites as the beneficiaries of the Arab Spring process (Figure 7). In all nations, respondents indicated that elites benefited “a lot” or “some” from the Arab Spring. In contrast, most respondents also believed that middle class and poor citizens did not benefit and were harmed by the Arab Spring; Syrians ranked its middle class and poor citizens as more disadvantaged than other nations. The results in Syria reflect the devastation of the civil war, which has hit elite citizens as well as the disadvantaged. Essentially, the survey respondents view the fallout from the Arab Spring protests as reinforcing the pre-2010 structures and the social, economic, and political inequalities that gave rise to the protests in the first place.

Figure 7 — Which Socioeconomic Groups Benefited From the Arab Spring?

Survey respondents’ views on how various ethno-religious groups benefited from or were harmed by the Arab Spring process reveal notable signs of the way these groups are perceived by the society at large (Figure 8). In Libya and Tunisia— two countries where the old regimes have been replaced with new governments since 2010 and Islamists have gained political ground—Salafists and Islamists were seen as having benefited disproportionately compared to other groups. Among religious minorities across the region, Christians are viewed with the least prejudice. Christians in Iraq and Syria were thought to have fared much worse than other groups and are the only population that was perceived to have been harmed rather than benefited from the Arab Spring. Shiites and Jews, by comparison, were regarded as having benefited from the Arab Spring protests despite comprising negligibly small minorities in almost all countries in the survey and lacking much influence (Iraq and Lebanon are exceptions with their sizable Shiite populations, as is Palestine, given the Jewish population in the West Bank). Moreover, Jews And Shiites are collectively ranked as benefiting more than any other religious group in half of the 10 nations under study; this finding may reflect negative perceptions of these minorities rather than their lived experiences.

Figure 8 — Which Ethno-Religious Groups Benefited From the Arab Spring?

The survey results show that the Arab Spring protests failed to deliver what many in the MENA region hoped they would. While the protests did bring about more political freedoms in a few nations, respondents in most countries did not think that the protests led to significant levels of improvement in economic or political conditions.

The overwhelming majority of respondents in each country think that the elite disproportionately benefited from the Arab Spring at the expense of the middle and lower classes. Likewise, perceptions of which ethno-religious groups benefited from the Arab Spring reinforce prevailing social prejudices against certain religious groups, particularly Shiites and Jews. These views were supported by an emerging consensus that ethno-religious tensions worsened across the region.

While regimes in the region have engaged in limited governance reform in response to new conditions in the post-Arab Spring world, such changes appear to be adjustments to ensure greater societal control and reduce prospects of large-scale dissent. For example, some nations experienced improvements in media freedom, political expression, or women’s rights, but others remained stagnant or regressed in these realms. The limited successes experienced by the majority of the population may assuage their concerns for the time being. However, the compounded effects of the lack of change from the pre-Arab Spring status quo and the perceptions of who benefited from—and was harmed by—the Arab Spring contain the seeds of future instability for the region. The evidence of widespread disappointment across the region generates clear policy implications for our findings.

Economic woes need to be addressed with a sense of great urgency. The problem of youth unemployment and pervasive corruption undermine the promise of longterm economic reform programs that many governments across the region announced and began implementing. A lack of economic diversification and development in most of the nations surveyed will continue to leave the demographic “youth bulge” stranded without the opportunity for economic advancement. In addition, high levels of corruption among political elites may exacerbate middle- and lower-class awareness of their economic exclusion. This sense of frustration with how the Arab Spring protests unfolded is highly likely to foment greater levels of antagonism toward existing regimes.

The Arab Spring process began eroding the unitary nation-state paradigm developed in the post-independence period that had largely ignored ethnic or religious identities. Ethno-religious minorities, however, have increasingly been marginalized over time, and the aftermath of the Arab Spring protests only reinforced the prejudices these minority groups face. Governments in the region should proactively work toward eliminating bias encountered by minority groups to both protect them and decrease ethnic and religious tensions. If no initiative is taken by these nations, the deteriorating state of ethno-religious relations promises to introduce a more trenchant sectarian element to the next wave of instability in the region.

1. The survey was conducted in May-June 2018 in 10 Arab nations in the Middle East and is part of a broader project on pluralism in the Arab World generously supported by the Carnegie Corporation of New York. The survey was conducted online by YouGov, and 8,501 people responded. The sample is not representative at the country level; it is disproportionately urban, educated, and male.

2. More information on the Arab Transformations Project is available at: https://www.arabtrans.eu.