While Mexico implemented changes to its domestic migration and refugee law in 2014, many of the reforms have yet to take shape on the ground.1 With increasing numbers of asylum claims filed in Mexico, including by individuals who are unable to reach the United States—often people from Central America, Venezuela, and a broad range of other countries2—a strong and well-functioning Mexican asylum system is in the best interest of both the Mexican and U.S. governments. A critical part of the asylum system is the broad network of Mexican civil society organizations (CSOs) that provide a range of services for asylum seekers, including legal assistance and, in some cases, advocacy to the Mexican government for a stronger protection system. However, these organizations are strapped for time and resources. Such limitations make access to their U.S. counterparts and policymakers all the more difficult, despite the U.S. government’s enormous sway over domestic migration issues in Mexico.

The United States’ influence has intensified since 2019, when the number of Central American asylum seekers and migrants trying to reach the U.S.-Mexico border increased. Hoping to reduce U.S.- bound migration, the Trump administration threatened to impose tariffs on Mexican goods if Mexico did not comply with its key demands of migration enforcement. This coercive strategy ultimately resulted in the signing of the U.S.-Mexico Joint Declaration, which militarized Mexico’s approach toward migration enforcement through the deployment of Mexico’s National Guard throughout the country—particularly along its southern border. This strategy was meant to prevent Northern Triangle nationals from transiting through Mexico on their way to the United States.3 The Migrant Protection Protocols, which allowed non-Mexican nationals applying for asylum in the United States to be returned to Mexico while awaiting their U.S. court hearing, also had a devastating effect on asylum seekers who faced dire conditions in overcrowded and unsanitary camps and shelters along the U.S.-Mexico border. The program shifted the burden of meeting asylum seekers’ basic humanitarian needs to the Mexican government and civil society organizations, which were not sufficiently equipped to respond to the increasing numbers seeking protection.

We know from other geographic contexts that civil society actors in emerging countries of asylum benefit from ties to international actors and policymakers based in the regional hegemon, as these connections provide them with leverage when attempting to pressure their government.4 In Morocco, domestic CSOs were instrumental in pressuring the government to enact new migration and asylum legislation in 2013, aided in part by transnational ties to European counterparts and funding networks.5 In Turkey, CSOs have benefited from direct ties and meetings with European policymakers, human rights lawyers, and non-governmental organizations (NGOs), allowing them to continue to advocate for better policies and practices toward asylum seekers and migrants in Turkey.6

To understand the scope of existing relations between Mexican CSOs and their U.S. counterparts and policymakers, we conducted an online survey in March 2021. The survey had a 40% response rate, with 29 individuals from 27 organizations participating. The surveyed organizations ranged in size and scope of work, but all (100%) have connections with the UN Refugee Agency (UNHCR), and many (80%) have connections with the International Organization for Migration (IOM).7 This is of note, as nearly all U.S. foreign assistance for the protection sector in Mexico is funneled through the UNHCR and the IOM, which are both international organizations that grant funding to numerous national, service-providing NGOs as implementing partners. As a result of this multi-level funding structure, Mexican NGOs presumably have fewer opportunities to engage directly with the source funder (usually the U.S. Department of State’s Bureau of Population, Refugees, and Migration) or communicate their on-the-ground experience to U.S. policymakers.

Most Mexican CSOs connected to organizations doing similar work in the U.S. are located in Mexico City or along the U.S.-Mexico border. Of those who cooperate with U.S. organizations, 45% engage in formal cooperation (for example, a project-based agreement or funding), while 60% have informal ties, such as discussions at workshops or conferences.

The most striking finding of the survey was that over 90% of respondents strongly or somewhat agree that establishing or maintaining stronger connections with NGOs and policymakers in the United States would be helpful for their organizations (see Figure 1). Of those respondents who believe stronger connections would be beneficial, almost 30% listed “the ability to plan for advocacy and engage with national-level dialogues” as the main benefit, while close to 20% listed “building long-term capacity rather than responding to emergency situations.” About 18% of respondents chose “improving longterm effectiveness” of their organization as the main benefit of developing ties with U.S. organizations, and finally, another 18% listed “having a greater sense of the work that other organizations are doing.”

Figure 1 — Would Establishing Stronger Connections With NGOs and Policymakers in the U.S. Be Helpful for Your Organization? 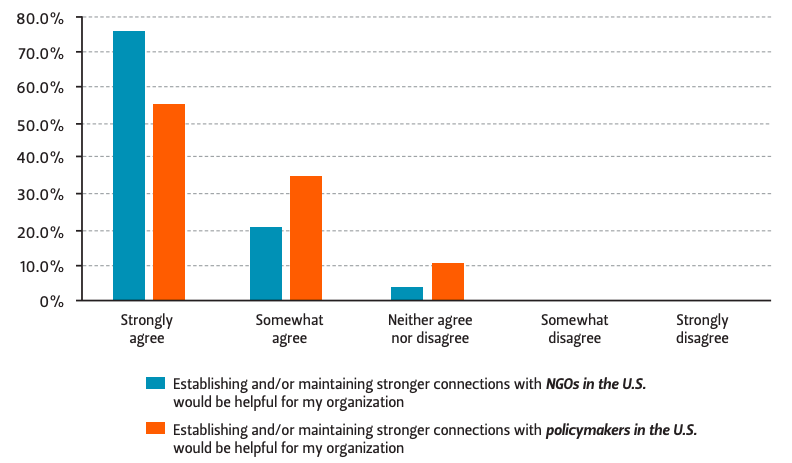 Almost 70% of respondents are currently connected to at least one organization doing similar work in the United States (represented by blue in Figure 2), but only 20% are currently connected to U.S. policymakers (represented by orange in Figure 2). Those who do have some connections to U.S. policymakers and government entities mentioned ties with the U.S. Department of State (especially the Bureau of Population, Refugees, and Migration), the Department of Homeland Security, and Senators Mark Kelly and Kyrsten Sinema from Arizona, and Senator Elizabeth Warren from Massachusetts.

Figure 2 — Is Your Organization Currently Connected to Organizations Doing Similar Work to Protect Asylum Seekers, Migrants, or Refugees, and to Policymakers in the U.S.? 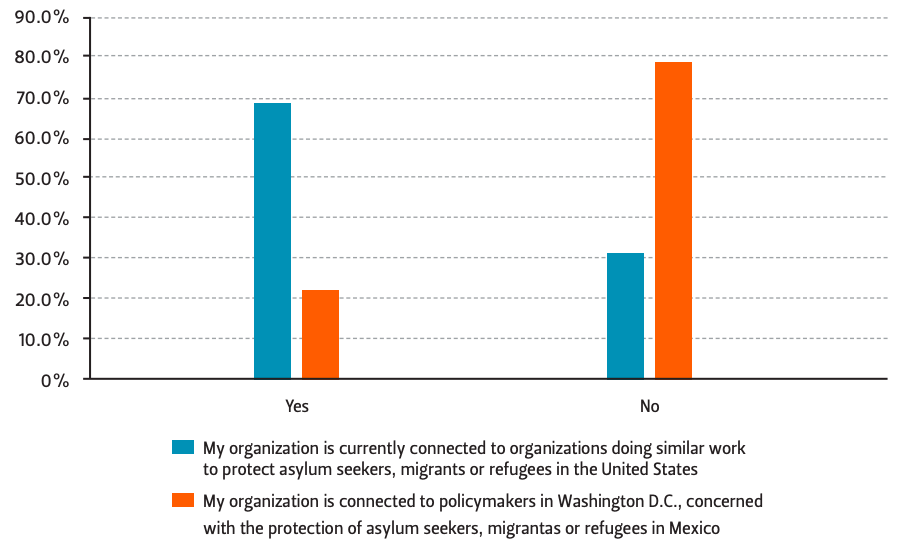 Time and resources are the main barriers for Mexican CSOs to establishing connections with organizations doing similar work in the United States (represented by blue in Figure 3). The secondary barrier is the lack of an introduction. Respondents also mentioned language barriers and a lack of understanding about the context and asylum systems in both countries as reasons for the lack of connections. 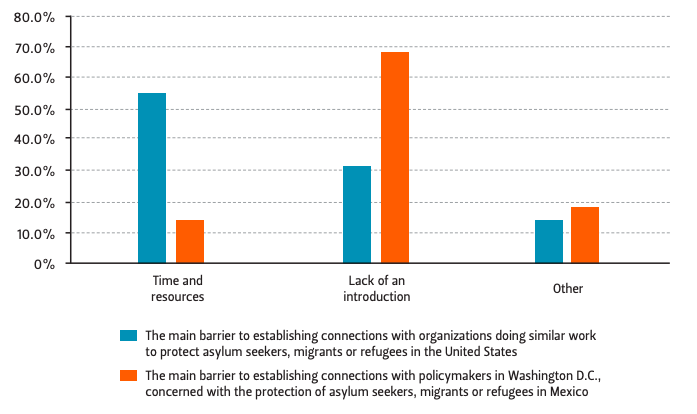 Almost 70% of respondents identified the lack of an introduction as the main barrier to establishing connections with U.S. policymakers (represented by orange in Figure 3), while time and resources were secondary barriers. Respondents also listed language barriers and a perceived lack of commitment to working together as additional difficulties.

There is a clear demand among migration and asylum-focused Mexican CSOs for expanded opportunities to develop links with U.S. organizations doing similar work, yet lack of an initial introduction as well as inadequate time and resources present barriers to engaging in this kind of collaboration. Opportunities must be pursued in order to overcome these barriers, including eliminating the significant hurdle of first contact and creating space for relationship-building and sustained dialogue. Such opportunities would serve as a way for Mexican and U.S. organizations to introduce themselves to one another and allow participating organizations to engage in discussions aimed at establishing a common agenda. Workshops and other convenings could help initiate cooperation and could be sustained through a specific U.S.-Mexico collaboration platform on migration and asylum, taking the form of a working group, regional forum, or consortium. To ensure the long-term sustainability of this type of international collaboration, it is vital that initiatives be adequately and independently financed, such that participating organizations are enabled to engage in collaboration without being asked to reallocate already limited resources away from their core activities.

Mexican CSOs also identified the need for expanded access to U.S. policymakers in order to more effectively advocate for a stronger, rights-based regional response and to make the needs of their beneficiaries and their host communities known. Addressing existing barriers in Mexican civil society’s access to U.S. policymakers would empower CSOs to more effectively challenge the securitization narrative now dominant in the Mexican government’s approach to asylum and migration management, as well as the shrinking space for rights-based discourse and advocacy.

In addition to expanding access to U.S. peer organizations through cross-border coordination and experience-sharing activities, Mexican CSOs in the protection sector would benefit from the ability to engage in more complex relationships with U.S. institutions and U.S.-based CSOs. At present, Mexican CSOs are likely to be secondary beneficiaries of U.S. foreign assistance, with funds redistributed through major international organizations such as the UNHCR and the IOM. Due to the global scale of these types of organizations and their specific mandates and limitations, the partnership structures they implement vis-à-vis national-level organizations often focus on much needed direct service provision, which limits the ability of implementing partners to engage in other types of activities— including direct, targeted advocacy with key institutional actors, especially those outside of their operating context.

For these reasons, additional institutional relationships stand to unlock the expanded potential of Mexico’s national CSOs to engage in advocacy, systematic human rights monitoring, complex strategic litigation, information sharing, and cross-border collaboration, including through partnerships with other U.S.-based international NGOs. Such partnerships can also help support the development of greater connections between Mexican CSOs and U.S. policymakers and funders, enabling a stronger upward flow of on-the-ground observations from a more diverse pool of national NGOs to U.S. policymakers. These partnerships would allow for more investment in the long-term sustainability of Mexico’s protection sector by expanding the capacities of locally-based civil society actors. While other researchers have pointed to the importance of direct investment in the Mexican government’s asylum and migration management institutions as opposed to an over-reliance on UNHCR technical and financial support,8 we argue that the same holds true for investments in the long-term resilience of Mexico’s civil societal sector, which is already stretched thin in attempts to meet the gaps left by an inadequately supported governmental response.

The challenges brought by the continuing northbound migration of individuals through South and Central America are complex, bringing calls for fresh, comprehensive approaches.9 Mexico plays a critical role in migration as an emerging host country with tremendous potential to improve migration and asylum management in line with international standards. Implementing improvements in Mexico’s migration and refugee response will lead to greater respect for the human rights of people on the move, but addressing the development of Mexico’s asylum infrastructure will require consultation and partnership with Mexican civil society. At the same time, existing transnational cooperation must be bolstered, alongside the opening of new avenues and channels for dialogue and strategic partnerships. Coordination and increased policymaking on regional approaches and responses to migration by lawmakers in Washington will benefit greatly from the inclusion of voices in Monterrey, Mexico City, Tapachula, and beyond.