The Baker Institute’s Sabbagh Fellow in Middle Eastern Studies, Samih Al-Abid, Ph.D., and the Baker Institute’s Brochstein Fellow in Middle East Peace and Security in Honor of Yitzhak Rabin, Yair Hirschfeld, Ph.D., joined Ambassador Djerejian to discuss the obstacles and opportunities for a prospective peace deal prior to the nine-month deadline for negotiations set by U.S. Secretary of State John Kerry, which is due to expire next spring.

This latest visit builds on previous efforts by Djerejian, Hirschfeld, Al-Abid and the Baker Institute conflict resolution program to advocate for a strong U.S. role supporting direct negotiations between the parties. In February 2010, the team published the report, “Getting to the Territorial Endgame of an Israeli-Palestinian Peace Settlement,” which offers concrete recommendations to U.S. negotiators on the territorial component of an Israeli-Palestinian peace settlement. 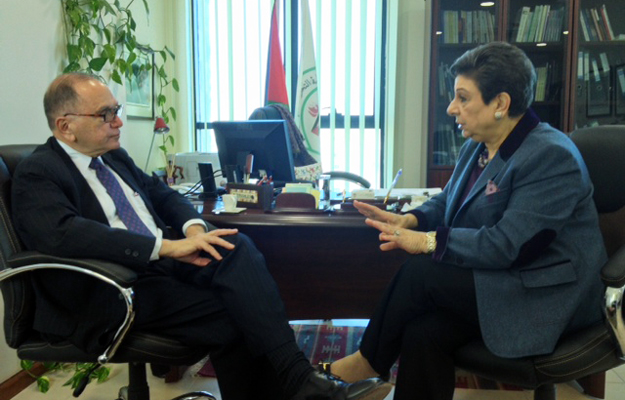 Before the start of the current round of negotiations in March, Djerejian published a series of recommendations for the United States to advance a two-state solution, which argued that proactive U.S. engagement is the only policy option that has the potential of creating a realistic policy trajectory of peace and stability-building in the Middle East and re-establishing U.S. leadership in the region. The paper was described in a Jerusalem Post article as an “indicator … of the direction Kerry is going, both structurally and substantively.”