The Art of the Deal … in Arabic

The Saudi leadership drives a hard bargain.  They have won a major concession from the U.S. while making a largely symbolic change in oil policy — and kept Russia on board with the plan. Consumers (and politicians) hoping for relief from rising prices at the pump are likely to be disappointed.

On Thursday, the OPEC+ group agreed (in another 15-minute meeting) to accelerate planned production increases, responding to consumer anxiety over soaring fuel prices.  Interestingly, this decision appears to have been supported by Russia, despite sanctions that have created major difficulties in marketing the country’s oil exports.

Under the terms of a deal reached last year, the group had originally planned to increase output by a bit over 400,000 b/d in each of July, August and September — at which point the large COVID-related production cuts made in 2020 would have been fully reversed after nearly two-and-a-half years.  Yesterday’s agreement condenses the plan into increases of about 650,000 b/d in July & August, so the group reaches the production total originally planned for September a month early (see table). 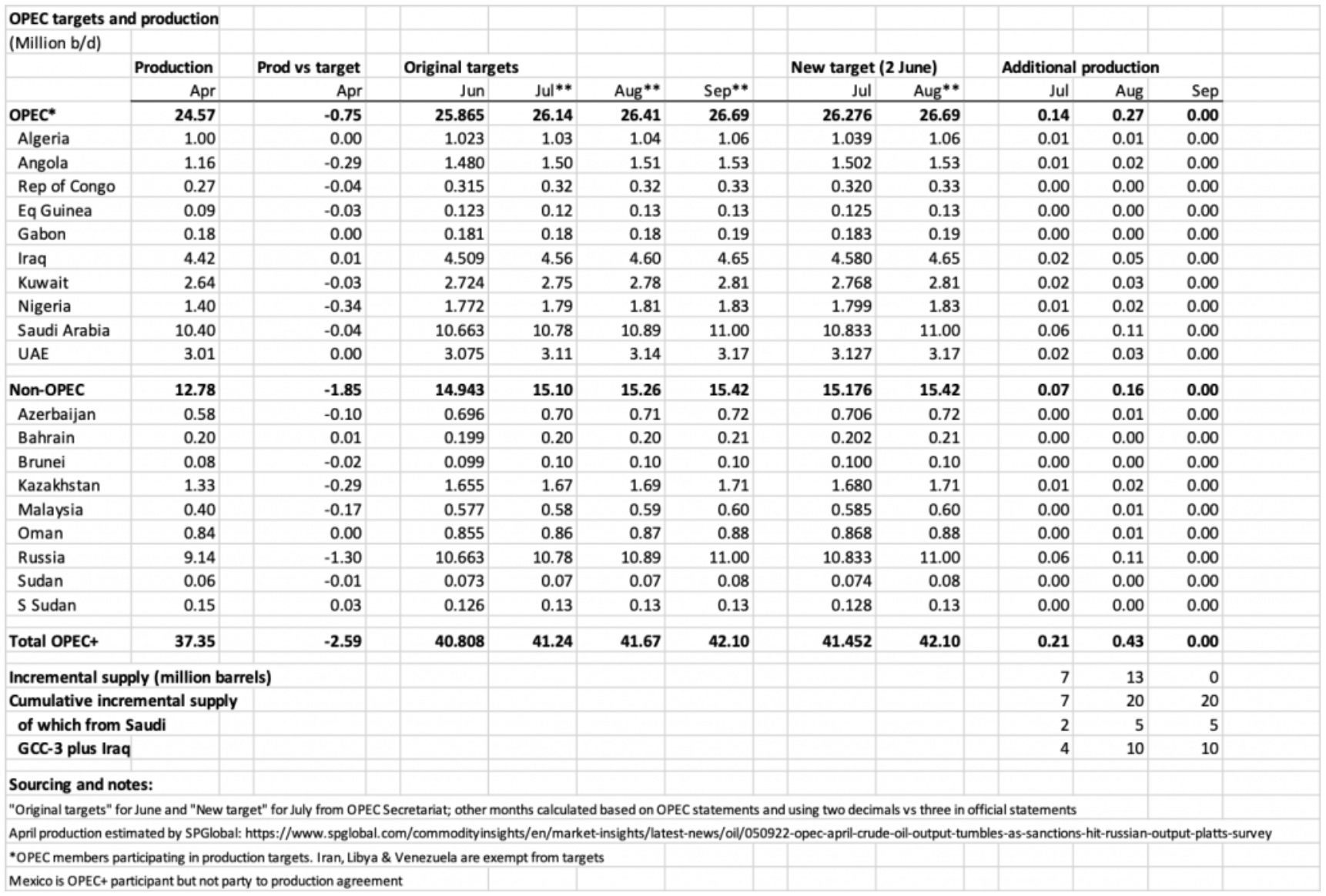 The change in policy comes after months of refusing to alter the production plan despite appeals from President Biden and other leaders of oil-consuming countries, refusals which had prompted the U.S. and its IEA allies to begin large releases of strategic stocks to limit price pressures.

The OPEC statement after the meeting explained the acceleration as driven by expectations of reopening from lockdowns in “major global economic centers” (i.e., China) and increased refinery demand for crude following seasonal refinery maintenance.  The group concluded by noting their commitment to “stable and balanced markets for both crude oil and refined products.”

The White House welcomed the decision, and also applauded the Saudi role in a ceasefire in Yemen. Later in the day, word circulated that President Biden, after vowing to make Saudi Arabia a ‘pariah’ for the Khashoggi murder and refusing to speak with Saudi Crown Prince Muhammad bin Salman, would visit the Kingdom later this month.  (Friday evening the White House said the trip would take place next month.)  This certainly gives the appearance that the two developments are connected.

It looks like a good deal for the Saudis.  In return for a visit from the President, Saudi Arabia forged an OPEC+ change that will — on paper — add just over 200,000 b/d of crude oil supply in July and 400,000 in August.  The cumulative increase would add about 20 million barrels to the global oil market during July and August.  To put that in context, the cumulative supply added over two months would cover world oil demand for roughly five hours.  Alternatively, it would be equivalent to one-third of what the U.S. will add over that period based on planned releases from its strategic stockpile.

Of that cumulative 20 million barrels, roughly five million would come from Saudi Arabia based on the Kingdom’s share of the group’s production target — adding less than half a day’s worth of current production in total over the next two months beyond what had previously been planned.

And in reality, there may not be much more: OPEC+ has been dramatically under-producing relative to official targets.  In April (the most recent month for which we have data), the group missed its overall production target by over 2.5 million b/d.  Roughly half of the “miss” was due to the drop in Russian production, but beyond that many members already lack capacity to add new supply.  Nigeria, Angola, Kazakhstan, Malaysia and Azerbaijan have all consistently missed their production targets in recent months. Given the group’s recent overall performance and assessments of likely remaining spare capacity being concentrated in the OPEC Gulf producers (GCC-3 plus Iraq), it is reasonable to expect perhaps half of the promised production increase to materialize—i.e., perhaps 10 million barrels in aggregate over July and August compared with what had previously been planned.  That would be equivalent to an increase of just 150,000 b/d from OPEC+ in a global marketplace of 100 million b/d.

Some reports argue that this marks the start of a new, post-Russian OPEC+ arrangement, and a thawing of Saudi-U.S. relations.  In theory, Saudi Arabia and the other Gulf producers with spare capacity could increase output beyond their targets to make up for shortfalls elsewhere.  But they have consistently refused to choose this path in recent months, and since last week’s meeting there has been no public statement to lend credence to this speculation.  The fact that Russia agreed to the change in OPEC+ policy (which was announced a day after Foreign Minister Lavrov visited Riyadh), also suggests that such a dramatic break is wishful thinking for now.

The announcement does not appear to have shaken bullish market views: After falling early in the day on news that OPEC+ would raise production, Brent prices closed slightly higher the day of the meeting, and have risen further since then (currently $120 per barrel).  AAA reports that U.S. national average retail prices for gasoline and diesel fuel both hit (nominal) records today (June 6), at $4.87/gal and $5.65/gal, respectively.

This article originally appeared in the Forbes blog on June 6, 2022.

How Arab-Chinese Cooperation Could Impact the Global Energy Transition

Natural Gas Balance in Europe: Germany as a Case Study