NAFTA Matters Less than You Think

Françoise and Edward Djerejian Fellow for Mexico Studies | Director, Center for the United States and Mexico

The brief below, available as a PDF, is an expanded version of a commentary by Russell Green that appeared in The Hill on June 19, 2017.

The authors also published a full-length research paper on the topic, available here.

Most analysis of NAFTA begins by citing the huge increase in bilateral trade between the U.S., Canada and Mexico since 1993 (Figure 1).[1] U.S.-Mexico trade—exports plus imports—has grown three and a half times faster than U.S. GDP since NAFTA began in 1994. If NAFTA were solely responsible for that trade, renegotiating it on more favorable terms might have big payoffs. However, there are seven problems with thinking NAFTA has mattered or can matter very much. 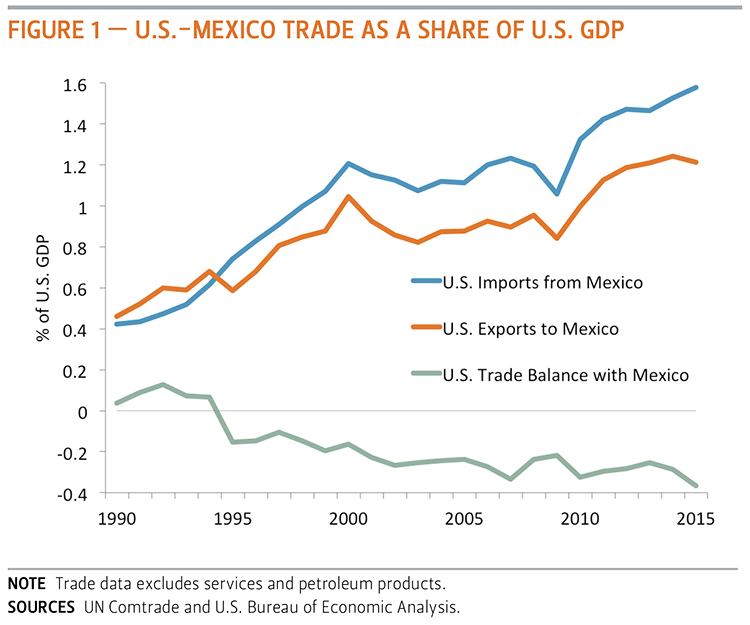 1. Trade with Mexico is not big as a share of GDP or the trade deficit, despite its impressive growth.

Exports plus imports were 1.4 percent of U.S. GDP in 1994. By 2015 it was 3.0 percent of GDP (Figure 2). The entire U.S.-Mexico trade deficit—not the portion of the deficit due to NAFTA, discussed below—amounted to $61 billion or 8 percent of the overall U.S. trade deficit. 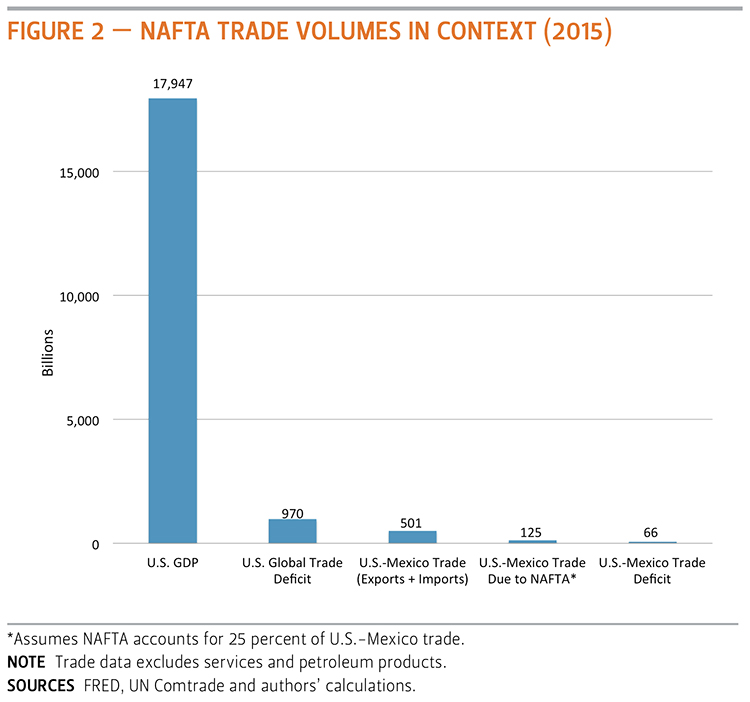 2. All international trade ballooned since 1993—not just among NAFTA countries—growing much faster than GDP.

Trade between NAFTA countries grew faster than with other countries (Figure 3). Standard trade models expect that pattern not because of NAFTA, but because its members are geographically closer to each other than any other trading partners. Trade is typically facilitated by lower transportation costs and greater familiarity with the market. Interestingly, Figure 3 shows most of Mexico’s gains in U.S. trade share stalled after 2000. 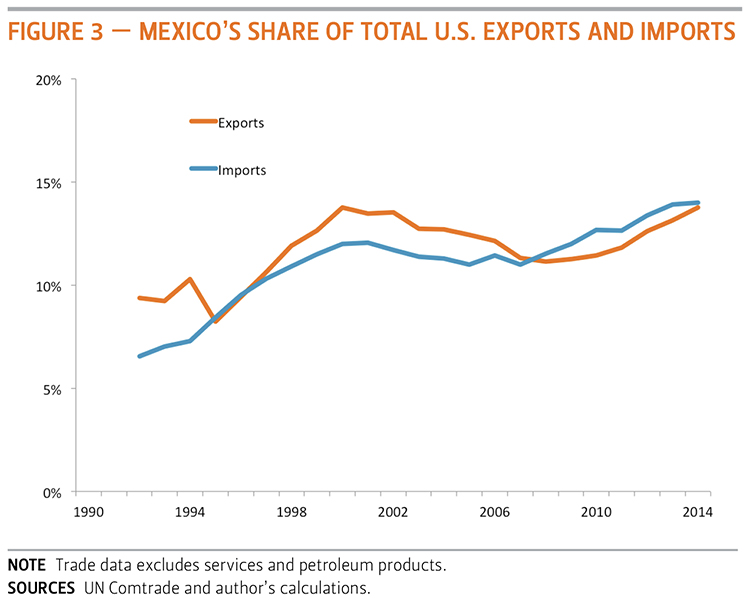 3. U.S.-Mexico supply chain trade grew because of other factors.

Adding to the rising trend in global trade has been an upswell of supply chain trade. North-South supply chains expanded as they became much more practical in the 1990s. Security concerns declined in low-wage countries in the post-Cold War era, transportation costs fell rapidly, and improvements in communications and information technology facilitated management of extensive cross-border supplier networks.The main point is that supply chain trade expanded in Europe, Asia, and North America in the post-NAFTA period mostly in response to new business opportunities, not trade policy changes.

The degree of U.S.-Mexico cross-border supply chain integration can be gauged by looking at trade in intermediate goods (goods meant to feed into the production of a final good). They comprise 73 percent of U.S. exports to Mexico (Figure 4). The share of intermediate goods imported from Mexico is lower, at 40 percent (Figure 5).[2] 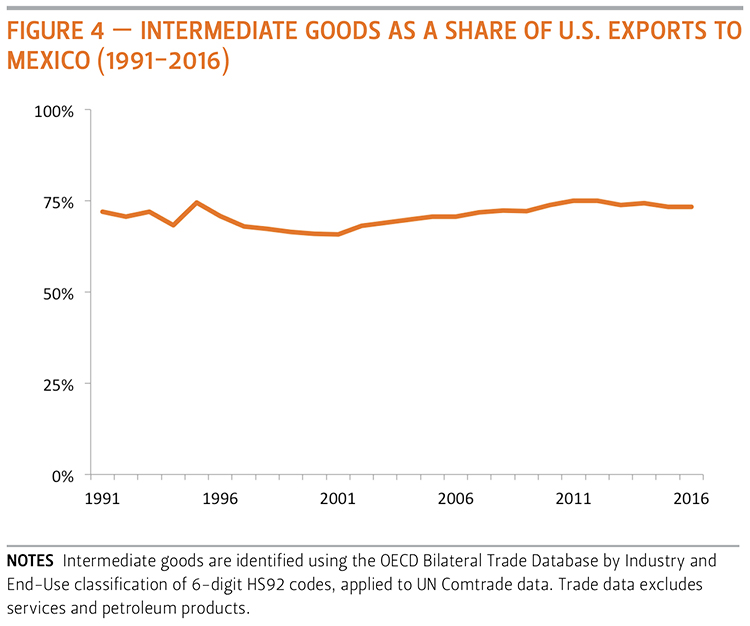 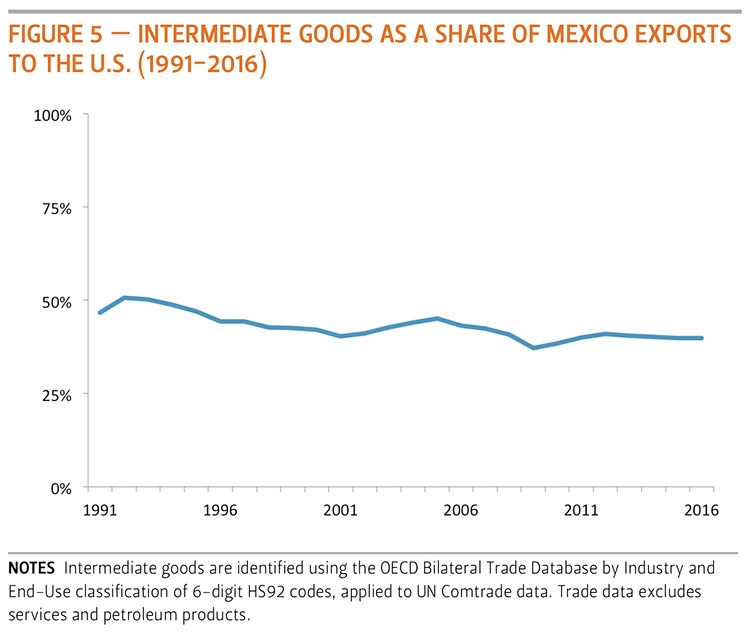 4. Both the U.S. and Mexico began lowering tariffs before NAFTA.

Indeed, the trend in U.S. tariffs indicates that Mexico experienced a faster decline in tariff preference in the U.S. before NAFTA than after (Figure 6).[4] The largest drops in Mexican tariff preference— preferential treatment for Mexican goods relative to goods from other economies— occurred from 1991 to 1995. While NAFTA tariff reductions continued to phase in until 2009, reductions in tariffs for non-NAFTA countries beginning in 1995 approximately matched NAFTA reductions.[5] 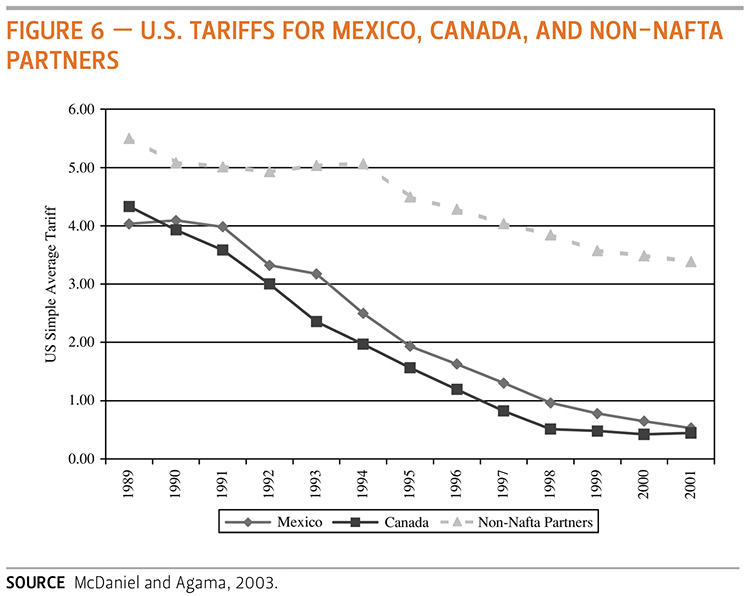 Complementing the tariff evidence, one recent study finds that including the general trend of U.S.-Mexico trade from 1990 in their econometric study greatly diminishes the measurable impact of NAFTA on trade.[6] It appears that reforms in Mexico were already propelling the bilateral trade relationship, which NAFTA mostly served to lock in and supplement.

5. The Peso Crisis of December 1994 shaped trade much more than NAFTA.

The peso and the Mexican economy fell hard, and Mexico’s demand for U.S. goods was decimated. Meanwhile the mid-1990s was a period of robust growth in the U.S., and demand for Mexican goods remained strong. This can be seen in the one-time large drop in the trade balance in 1995 (Figure 1). In contrast, studies have been able to identify virtually no impact of NAFTA on the bilateral trade deficit.

For several reasons, including the deepening linkages between the two economies, Mexico’s economy has not grown much faster than the U.S. economy since 1994. This means there has been no opportunity to re-equilibrate relative demand. As a result, the U.S. trade deficit with Mexico relative to U.S. GDP has remained constant and close to zero, dropping by only 0.2 percentage points across the next 20 years. More recently, the peso has weakened further, going from MX$13 to a dollar in 2014 to MX$22 to a dollar in early 2017, fueling greater demand for Mexican goods in the U.S. and depressing demand for U.S. goods in Mexico. The peso has since strengthened, but it remains much weaker than it was in 2014.

7. Trade agreements may simply shift trade from one importer to another.

Neither overall trade nor the trade deficit would change if American consumers merely buy Volkswagens from Mexico instead of from Germany or Brazil. The econometric evidence on NAFTA is mixed, with the strongest evidence of “diversion” occurring in the apparel sector in the 1990s. It is possible that growing trade among NAFTA members did not translate to total trade growth across all U.S. trade partners.

Trade and economic integration are not intrinsically valuable, as exemplified by points 6 and 7. We should care instead about related changes in consumption, jobs, and general well-being. If we can afford more Volkswagens when they come from Mexico instead of Germany or Brazil, we are better off. A struggling U.S. car company may be able to reduce the number of U.S. job losses if, by shifting some production stages to Mexico, it retains global competitiveness.

Measures of general well-being are much harder to link to trade, of course. NAFTA renegotiation may lead to big improvements for certain small groups of people. On a nationwide scale, NAFTA does not appear to have been a game changer, and its renegotiation will not be either.

So far, Mexico’s attitude toward NAFTA has been positive. Mexican public opinion still seems to favor the agreement, but there is an increasing perception that it has been a bad deal for the country. Mexico had expected NAFTA to help it move much farther than it has on enduring problems like poverty, inequality, agricultural competitiveness, wage growth, and development of strong domestic firms.

Consequently, Mexican leaders would prefer renegotiations to end quickly, so the issue does not linger into election season. If it does, two problems arise for the ruling Institutional Revolutionary Party (PRI). First, if Mexican President Ernesto Peña Nieto is perceived as having conceded too much, Mexico’s Congress will step up its criticism and opposition. The National Action Party (PAN), the main opposition party and a supporter of NAFTA, could break away from its support of the renegotiated agreement for fear of being perceived as too close to the PRI running up to the mid-2018 elections.

Second, the left wing in Mexico likely will not support any revision of the agreement. It can argue that NAFTA has actually been unfair to Mexico and Mexican workers and can score more electoral points the longer negotiations last. The left has in fact threatened that it will seek to renegotiate the agreement itself.

Thus, renegotiating NAFTA in the second half of 2017 and first half of 2018 carries with it enormous political risks for Mexico. The ruling PRI party could pursue tough negotiating tactics to win electoral points. Alternatively, it could aim for fast renegotiation, making important concessions, hoping the issue fades quickly. Both risk a party change in the upcoming elections. If that happens, trade may not be the only Mexican policy that NAFTA winds up changing.

1. Services and petroleum products were not affected by NAFTA. They are a large component of U.S.-Mexico trade, however. We omit them here because, for instance, fluctuations in the price of oil can obscure trends in NAFTA-related trade.
2. The OECD classification used here removes product lines with mixed usage to ensure a clean estimate. Adding in goods that are commonly used for both intermediate and final consumption purposes, e.g., personal computers, the share of U.S. exports rises to 77 percent. The share of U.S. imports rises to 55 percent.
3. Lorenzo Caliendo and Fernando Parro, “Estimates of the Trade and Welfare Effects of NAFTA,” The Review of Economic Studies 82, no. 1 (2015): 1–44.
4. Christine A. McDaniel and Laurie-Ann Agama, “The NAFTA Preference and U.S.- Mexico Trade: Aggregate-Level Analysis,” World Economy (2003).
5. Note, these are aggregate tariff rates. Rates for individual goods doubtlessly deviated from this pattern.
6. Thomas Zylkin, “Beyond Tariffs: Quantifying Heterogeneity in the Effects of Free Trade Agreements,” March 2016.
7. Specifically, if imports are not subtracted from exports, the value of intermediate goods will be counted when they cross the border originally, and again whenever they cross at later production stages.

This publication was written by a researcher (or researchers) who participated in a Baker Institute project. Wherever feasible, this research is reviewed by outside experts before it is released. However, the views expressed herein are those of the individual author(s), and do not necessarily represent the views of Rice University’s Baker Institute for Public Policy.

Cite as:
Green, Russell and Tony Payan. 2017. NAFTA Does Not Matter as Much as You Think (But Renegotiation Matters a Lot). Issue brief no. 06.19.17. Rice University’s Baker Institute for Public Policy, Houston, Texas.

Center for the U.S. and Mexico | Report

Read More
Center for the U.S. and Mexico | Report

Read More
Center for the U.S. and Mexico | Journal