James A. Baker, III, the honorary chair of the Baker Institute, is the only American to have served as secretary of state, treasury secretary and White House chief of staff, playing key roles in formulating and implementing some of the most important policies of the era.

Mr. Baker also led the presidential campaigns of Presidents Ford, Reagan and Bush in five consecutive elections between 1976 and 1992. However, as Mr. Baker — who earned a J.D. from The University of Texas — has said, he began his professional career as an apolitical young lawyer “too busy trying to make it in a competitive law practice" to become heavily involved in politics.

His first significant political experience came when he served as Harris County campaign chairman for George H.W. Bush's U.S. Senate campaign in 1970. Mr. Bush had encouraged Mr. Baker to become active in the race in part to help relieve his grief over the death of his first wife, Mary Stuart.

Although Mr. Bush lost to Lloyd Bentsen, Mr. Baker helped his friend carry Harris County. This led to his becoming state ﬁnance chairman for the Republican Party of Texas in 1971 and 1972, and Gulf Coast regional chairman for the Nixon re-election campaign in 1972. 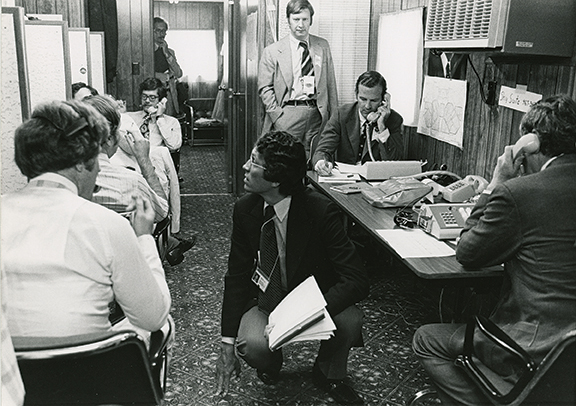 Mr. Baker brought his considerable experience to his next role, this time in Washington: He was appointed under secretary of commerce, the second-ranking position in the department, in the administration of President Gerald Ford. In August 1976, the president showed his high regard for Mr. Baker by asking him to be his national campaign chairman for the general election effort against Gov. Jimmy Carter. The national press dubbed Mr. Baker a “Miracle Man.”

In 1977, following Mr. Ford’s very narrow loss to Jimmy Carter, Mr. Baker returned to the practice of law in Houston. Now bitten by the political bug, however, he decided to run for attorney general of Texas in 1978. He and his wife, Susan, campaigned all across the state. He lost, despite a good race.

Soon after, Mr. Baker and George H.W. Bush began to organize the latter’s campaign for president. Gov. Ronald Reagan ultimately won the GOP nomination but, in an effort to unify the party, he chose his most tenacious opponent, George H.W. Bush, to be his vice presidential running mate. 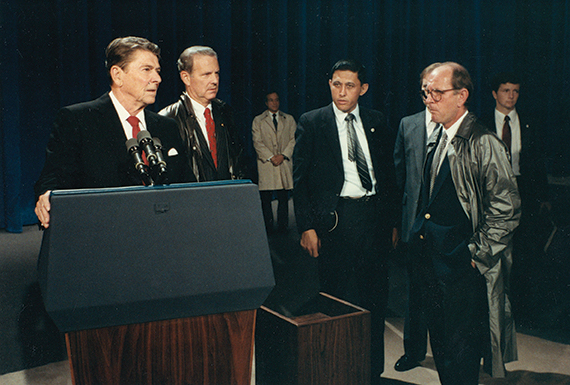 In the 1980 general election, Mr. Baker was a senior advisor to the Reagan–Bush campaign with speciﬁc responsibility for the presidential debates. Gov. Reagan’s optimism and message of hope and opportunity were reassuring to the American people, and he won the presidency by a landslide. Mr. Baker’s acute political instincts, his prior Washington experience and his attention to detail had made a strong impression on the candidate and Nancy Reagan. And so President Reagan called on Mr. Baker, whom some had nicknamed the “Velvet Hammer,” to be his White House chief of staff.

President Reagan was re-elected in 1984 with a 49-state landslide victory over Walter Mondale in a campaign largely run from the chief of staff’s ofﬁce at the White House.

In 1988, George H.W. Bush was a two-term vice president and the putative front-runner in the Republican primaries. With President Reagan’s reluctant blessing, Mr. Baker left his prestigious post as secretary of the treasury and assumed command of Mr. Bush’s presidential campaign from its bare Washington, D.C., headquarters.

In order to avoid the “slings and arrows” that they knew would be coming Mr. Bush’s way from the Democratic convention, the two friends took a summer 1988 trip into the Wyoming wilderness where they could make plans for the approaching campaign. 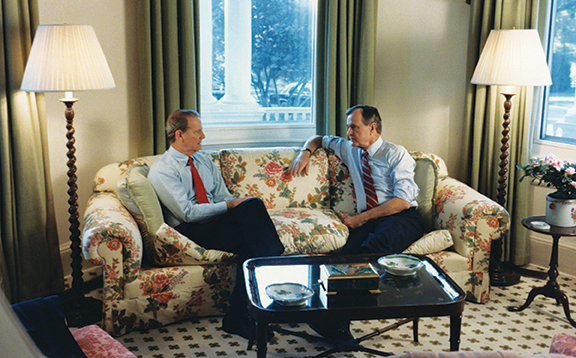 On the eve of the 1988 election, Vice President Bush told his friend that if he won he wanted him to be his secretary of state. Two days later, George H.W. Bush defeated Michael Dukakis to become the 41st president of the United States, and James A. Baker, III, became its 61st secretary of state designate.

As the election year of 1992 began, President Bush’s high job approval ratings began to erode. In July, he once again asked his friend to resign his cabinet post and take over the leadership of his campaign. President Bush lost his re-election bid in the November vote. 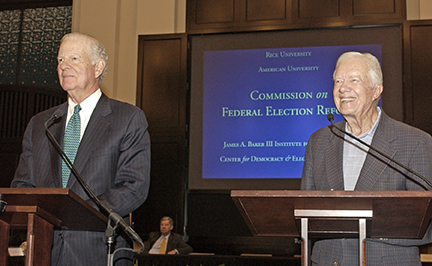 Mr. Baker continues to play an active role in international and national affairs from his base in Houston. Among other appointments, he has served as the personal envoy of UN Secretary-General Kofi Annan to seek a political solution to the conflict over Western Sahara (1997-2004); special presidential envoy for President George W. Bush on the issue of Iraqi debt (2003); co-chair, with former President Jimmy Carter, of the Federal Commission on Election Reform (2005); co-chair, with Lee H. Hamilton, of the Iraq Study Group, a bipartisan blue-ribbon panel examining a forward-looking approach to Iraq (2006); co-chair, with former secretary of state Warren Christopher, of the National War Powers commission, which recommended that Congress repeal the War Powers Resolution of 1973 and substitute a new statute that would provide for more meaningful consultation between the president and Congress on matters of war (2008); and on a bipartisan forum on the economic and foreign policy implications of the U.S. debt crisis (2012).

Mr. Baker also continues to advocate for the end of ivory sales and to support congressional legislation that would bolster efforts to curb wildlife trafficking and elephant poaching, and recently led — with George Shultz and Henry Paulson — a group of Republican statesmen calling for a tax on carbon emissions to fight climate change.

A Presidential Election During the Time of COVID-19

2019 Conference Report: A Presidential Election in an Uncertain Time