The Middle East in Turmoil: Challenges to U.S. Policy

Events in Iraq, Syria, Gaza and beyond have demonstrated the scale and complexity of the challenges facing the United States and its interests in the Middle East. The advance of the Islamic State of Iraq and Syria (ISIS) in the heart of the Arab world threatens to destabilize the entire region. The civil war in Syria continues to empower ISIS and other violent extremist groups while fueling Sunni-Shia conflict and widespread human suffering. Gaza recently witnessed the longest and deadliest round of clashes between Israel and Hamas, with dozens of Israelis and over 2,000 Palestinians killed. Beyond the immediate crises, U.S. foreign policy has not made significant headway on key long-term goals, such as an Iranian nuclear deal and a sustainable Israeli-Palestinian peace agreement.

At the inaugural Founding Director’s Lecture Series presentation, Baker Institute founding director Ambassador Edward P. Djerejian will discuss the historical forces at play in the current regional turmoil and outline factors for a coherent and comprehensive approach to U.S. policy in the Middle East. A question-and-answer session will follow the presentation.

Registration is free for Roundtable members with the promotional code included in the email invitation, and $20 for nonmembers. Full refunds are available before 5 p.m. on Monday, Sept. 15. After this date, you may send an alternate to attend the event without an additional charge. 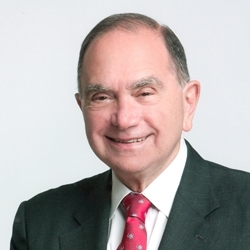 Ambassador Edward P. Djerejian is a leading expert on national security, foreign policy and the complex political, security, economic, religious and ethnic issues of the Middle East and South Asia. He has served in the administrations of eight former presidents from John F. Kennedy to William J. Clinton and has played key roles in the Arab-Israeli peace process and regional conflict resolution.

The Founding Director’s Lecture Series is designed to engage the public in the Baker Institute’s policy areas of expertise. This series provides a unique forum for Baker Institute Roundtable members and the community to become more informed about energy, health, the Middle East, science and technology, tax and expenditure policy, and other key issues of our time. A reception beforehand and a question-and-answer session following the lecture offer guests opportunities for thoughtful conversation.